To me, Fes was a much calmer and somewhat less-interesting version of Marrakech. It had the same winding medina, the same beautiful architecture, and the same souks selling an assortment of goods. Missing was some of the hustle and bustle and, thankfully, a lot of the harassment from merchants and other locals looking to make a buck.

The medina in Fes is a winding and confusing maze of roads and alleyways that seemingly lead nowhere. If you are trying to find a specific location, such as a riad or a palace, you will probably struggle to get there; however, some of the fun is wandering the narrow streets just to take in the atmosphere and culture. I even found it was a little fun to get ‘lost’ in the Fes medina, unlike in Marrakech, where getting lost meant you would be hounded relentlessly by locals wanting to give you directions (usually against your will). There are plenty of cafes and food vendors along the way to help break things up. 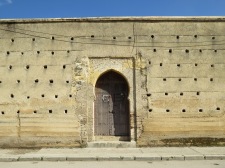 Like Marrakech, Fes contains a lot of interesting attractions including old palaces, gardens, and other cultural wonders. There was too much to see in only a couple of days, but I was able to take in some of the main attractions during that time.

Jnane Sbil Gardens:  These gardens, which are located just outside of the medina, provide a nice place to spend an hour or so. Palm trees, orange trees, flowers and well manicured bushes create a calm setting in the middle of a bustling city. And the best part is it’s free!

Tanneries: Fes is known for its tanneries, where merchants create intricate and beautiful leather products that cost a fraction of the price you would find in most western countries. The colorful pools of dye provide a great photo opportunity for tourists (as evidenced by the thousands of pictures on Google search). While the experience is interesting and somewhat educational, visiting the tanneries is similar to visiting a timeshare salesman. An outwardly friendly shop owner will invite you to the roof of his shop to watch the craftsmen work. You will be given a mint leaf to hold under your nose to combat some of the smell of leather. Next comes the soft sell where they casually show you the goods in a no pressure environment. If you still haven’t purchased anything at this point, you can expect an aggressive and hard sell by the merchant. You don’t have to buy anything, so if you aren’t interested in leather goods then just politely decline. The tanneries were interesting, but I’m honestly not sure why they are such a major tourist attraction.

El Glaoui Palace: There are some really beautiful palaces throughout Fes, and El Glaoui Palace is one of them. The palace is a little difficult to find, but once inside you are transported back to another time. The palace is in pretty poor shape, with decaying walls and a courtyard overgrown with tall grass and brush, but a lot of the original charm and beauty still remains. 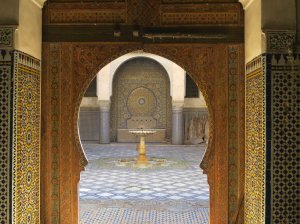 Bab Boujloud: This beautiful blue gate (green on the opposite side) is one of the main entrances into the medina. Just beyond the gate is a pleasant section of the city with numerous opportunities for shopping and eating.

Not a lot is known about the Marinid Tombs (also spelled Merinid Tombs) in Fes. They are situated at the top of a hill overlooking the city and nearby mountains. While the tombs have an interesting facade, there isn’t much to see or learn while you are visiting them. The real reason to head up the hill is for the stunning views of Fes and the surrounding countryside. While I was there, families gathered to converse and groups of boys sang and played drums. The whole hill had a strong community feel to it. It is a bit of a hike to walk up the hill, but you can grab a petit taxi to the top and back for relatively cheap. 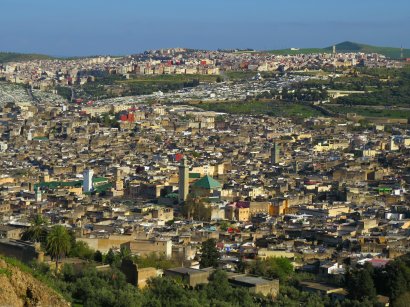 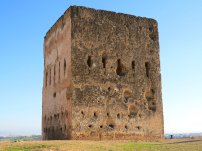