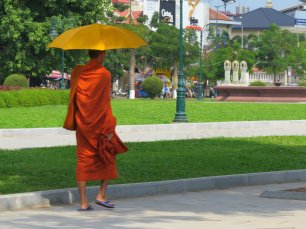 Phnom Pehn, Cambodia’s capital city, is a hustling and bustling mini-metropolis located at the intersection of the Tonlé Sap and Mekong Rivers. The city was founded in the late 14th century, and during the 15th century, the Khmer Empire relocated their capital there, leaving their elaborate temple complex at Siem Reap. Like many of the other Asian cities I have visited, Phnom Pehn has an intriguing mixture of old and new. Seven-hundred-year-old pagados sit in the middle of a busy street full of modern restaurants and shops. Monks casually stroll along, while motorbikes and tuk tuks zip around them, coming close but never colliding. It’s an organized chaos, and it seems to work (Well, kind of. More than 5 people a day die from motor vehicle accidents in Cambodia). Phnom Penh’s main highlights can all be seen in one long day, but give yourself at least two or three days for exploration. Continue reading to learn more about the city’s main attractions.

The Royal Palace and Silver Pagoda

The Royal Palace has served as the Cambodian king’s residence since it was constructed in the 1860s. Although it is very unlikely that you would catch a glimpse of the king, you can still walk the beautiful and well-maintained palace grounds while learning about the functions of the ornate royal buildings along the way. I hired one of the palace tour guides for an hour tour, and I was glad I did; there were lots of fascinating details that I would have missed otherwise. For example, I learned that Cambodians have a lucky color for every day of the week, and their royal ceremonies are conducted in the corresponding color based on the day. Also, the guide showed us an elevated door where riders would mount the elephants when they were still used as a means of transportation.

Within the palace walls, you will also find the Silver Pagoda, named for the silver plates (yes, actual silver) that make up the floor. Pictures are not allowed within the pagoda, but I can confirm there is an impressive horde of treasure inside, like something you might see in an Indiana Jones movie. Most of the treasure is in the form of Buddha statues made from or encrusted with pretty much every precious stone you can imagine.

Across the street from the Royal Palace is the National Museum of Cambodia. The building was constructed in the early 20th century and incorporates Khmer architectural designs. Inside the museum, you’ll find a large collection of Khmer art, with a focus on Buddist and Hindu imagery. At night, the museum offers a traditional dance and music performance that was one of the highlights of my time in Cambodia.

The Killing Fields and Tuol Sleng 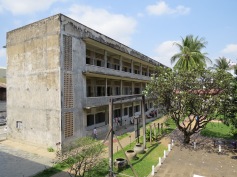 In 1975, Cambodia saw the Khmer Rouge rise to power, with Pol Pot as their leader. Under his rule, a systematic genocide was carried out to fulfill his vision of a utopian society. Many of the victims were those who opposed his regime, intellectuals, and ethnic and religious minorities. Over the course of four years, over two million people were killed. The genocide ended when Vietnam invaded Cambodia in 1979, but the Khmer Rouge officially remained in power until 1999. Cambodia has moved beyond its dark past, but it hasn’t forgotten it. A visit to the Killing Fields and the Tuol Sleng Genocidal Museum are must see destinations that add a sobering touch to your trip.

The Killing Fields, a few kilometers south of Phnom Penh, is the site where thousands of people were brutally murdered. Although there were several fields were killings occurred, this field acts as the museum and memorial, and it does not try to soften any of the horrific details. The barbaric extermination methods used by the Khmer Rouge — killing with farm tools, slitting throats with sharp palm tree husks, swinging babies into a tree — sound more like scenes from a horror movie than something that could happen in real life. But it was real life. The mass graves scattered throughout the field hold the victims’ remains. Pieces of cloth and bone continue to work their way to the surface, even today. Inside the memorial stupa in the center of the field, you will find dozens of skulls from the victims, many of which show the markings where they were stabbed or bludgeoned.

On the way back into town, most visitors stop at Tuol Sleng Genocide Museum, a former high school that was converted into the S21 prison during the Khmer Rouge’s rule. As you walk through the different buildings, you will learn of the horrible torture methods used against the prisoners while hearing stories told by the survivors. Some of the survivors that you learn about in the museum were actually outside selling books and talking about their time there.

I’ve heard some people describe these two sites as “uplifting,” but I did not feel that way at all. Disturbing. Terrible. Hard-to-stomach are all adjectives I would choose; however, I do think it is important to remember history, even the darkest times, and perhaps there is hope in seeing the Cambodia of today knowing where it was only forty years ago.

A short distance north of the Royal Palace is Wat Phnom, a Buddhist temple built in the late 14th century. The temple sits at the top of a hill (“phnom” in the Khmer language). Climbing the stairs past the protective naga statues (multi-headed, protector snakes) has an epic feeling to it. At the top, the peaceful temple seems like a world away from the chaos on the streets below. Like all temples, you will be expected to show respect when visiting by removing your hat and shoes and by dressing modestly.

Phnom Pehn offers ample opportunities for shopping. The Night Market, which runs only on weekends, is one of the most popular things to do in the city. When the sun goes down, you can stroll the merchant stalls looking for souvenirs (most of which had a sort of cheap look and feel) or grab some food from a stall and join the locals on the ground mats in the center of the market. There are even some contemporary Cambodian musical performances up on a stage (although, I can’t say I enjoyed all of the performers).

If you have more time, you can also check out the Russian Market, another popular destination for food and shopping.