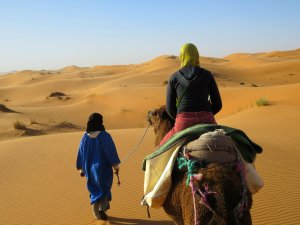 My good friend, Jess, and I had been in Morocco for only a few days before we headed to the desert. As much fun as we were having in the Moroccan cities, we had our eyes set on Merzouga, a small town situated at the base of the Erg Chebbi dunes. Spending the night in the Sahara was at the top of our list of things to do in Morocco, and we weren’t going to let a small thing like an eight hour bus ride deter us. We had seen the pictures online, and our minds were made up.

Like most activities in Morocco, organizing the trip was a bit sketchy. There were a ton of camel-tour companies listed on TripAdvisor, and even more had web pages indexed on Google, so I went with the most popular one first. All our tours are full. Well, okay then. I looked some more and eventually settled on a tour company that had a professional looking website (Camel Trekking Excursions). Within the day, I received an email back from Mohamed (that name doesn’t mean much in a country that is seemingly all Mohameds) saying he had availability and to show up with the money on the day of the trip. I followed up with a few more emails asking for clarification (how much money? where do I meet you?), and he volunteered to pick us up at our riad. Sure enough, the day of our trip, Mohamed was waiting at our riad with a grand taxi to take us to his office. Once there, we filled out some paperwork, dropped our bags off in a secure room, and within a few minutes, we were on the camels and ready to go. At this point, Mohamed unexpectedly said goodbye and left us with another man who had been helping him tend to the camels. Again, it’s Morocco, so you just have to go with these things.

The trip through the dunes was magical. Our guide, Ahmed, was incredibly friendly and knowledgeable, and he stopped to point out plants and animals, such as scarab beetles and other insects. He nonchalantly told us about the vipers that lived in the Sahara. When I asked if he was scared of them, he said “no.” Apparently, he can hear them hissing at him before he gets too near, so he knows when to detour around. As we moved further into the desert, it began to rain on us. I wasn’t exactly expecting rain in the middle of the desert, but again, we just told ourselves to go with it.

Two hours of walking later, we ended up at small Berber camp that had been made from the ruins of an abandoned Berber village. A host was waiting for us there, and we sat in a comfortable tent, overlooking the desert, and shared a mint tea with Ahmed. Jess and I bombarded Ahmed with questions about Morocco, the Berber people, life in the desert and everything else you can imagine. He was incredibly well spoken in English, and we found out later he was fluent in Berber, Arabic, French, Spanish, English and some Japanese.

Now, it was time for lunch, so we got to watch a man prepare a “Berber pizza” which was a ball of dough shaped into a pizza with the toppings such as meat, cheese, vegetables and oranges on the inside. The pizza was cooked on the ashes of a fire. We shared lunch with Ahmed, and then had a lazy afternoon around the camp. We spent some time exploring the Berber ruins, and Ahmed showed us the location of a Berber graveyard and the Berber toilet (i.e., behind whatever object provides you the most privacy). 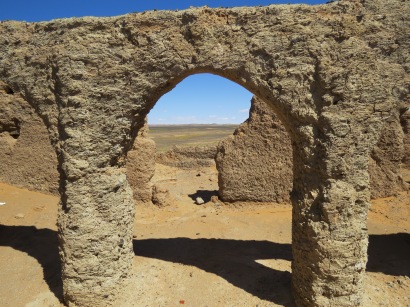 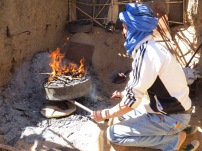 As the evening started to roll in, we climbed back on our camels and headed into the dunes towards the tent village where we would be spending the night. This time we were met with strong winds that blew sand into our faces. It’s all part of the experience. After about an hour, we reached camp, which was a group of fabric huts arranged in a circle (with an actual working toilet). The huts were warm and provided protection from the wind. Eventually, the wind calmed down, and we scaled one of the large dunes to watch the sunset. It was completely silent in the desert, so we just stood there for a good forty-five minutes enjoying the peace. With the last rays of light starting to disappear, we headed back to camp where Ahmed had prepared a delicious tajine dinner. He told us some more stories and demonstrated the traditional Berber percussion instruments.

With our bellies full, we walked out under the clear sky full of stars and constellations. We could even see the Milky Way Galaxy clearly. The stars weren’t quite as clear as I saw in the Australian Outback, but it was close.

The next morning, I woke up early and headed to the top of the dunes to watch the sun rise. 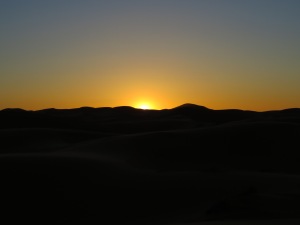 Ahmed prepared us a breakfast of tea, orange juice, and a selection of breads, jams and honey. After breakfast, we reluctantly boarded our camels and headed back to Merzouga, sad to leave such a beautiful place. The trip was brief, but well worth the time and money invested in getting there. Plus, we got some hella-awesome pictures for Insta!

Whoops! Did I say that out loud?