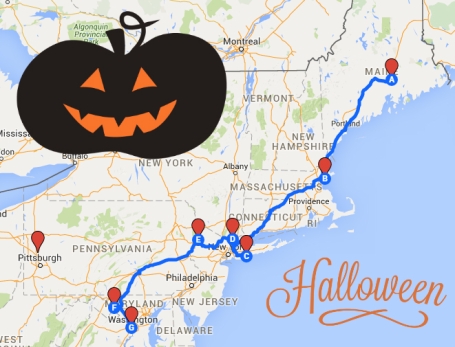 I’m a huge fan of Halloween (the holiday and the movie). I’m also a huge fan of road trips around the United States, so combining these two interests into one spine-tingling tour was a no-brainer (I feel like there is a zombie pun in there somewhere). Although there are plenty of haunted and scary sites to visit around the country, the northeast is the place to be for Halloween. And as a bonus, October is the best time of year to take in the beautiful fall foliage. This trip starts in Maine and ends in Washington, DC. All of the points of interest have been added to a Google Map if you want to take a closer look at the navigation. Spooky Travels! 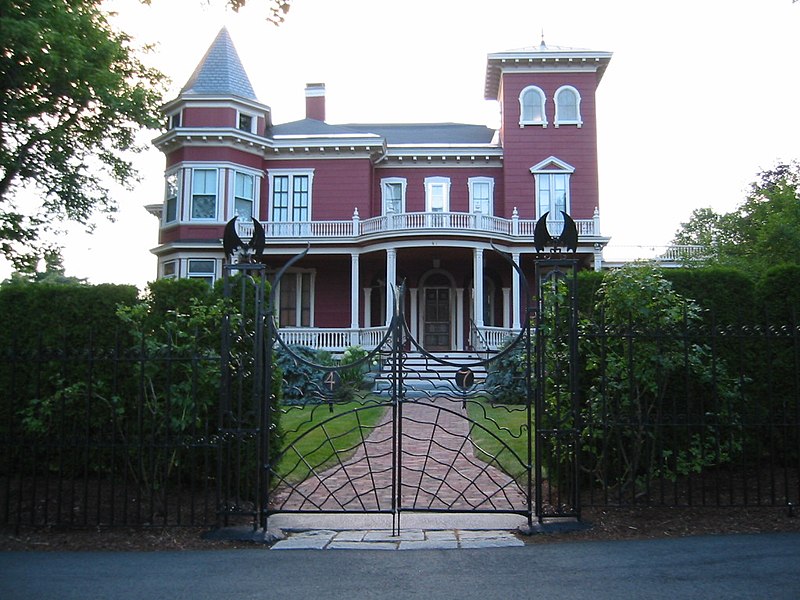 What better place to start a Halloween road trip than at the King of Horror’s house?  Stephen King has written some of the most iconic horror stories of the last century, including Carrie, The Shining, Cujo, It, and Pet Semetary. King’s house looks exactly as you might imagine it would, with old, Victorian architecture and a spider-web-themed gate. It wouldn’t be out of place in one of his novels. While you are in Maine, try to stop off in one of the numerous small towns throughout the state. These have been the inspiration and setting for many of King’s stories. For more info on the house, check out this blog post.

Note: This is a private residence, not a museum or tourist attraction. Be respectful!

Driving Time to Next Point: 3.5 hours

The city of Salem, located right outside of Boston, is the site of the famous witch trials of 1692 and 1693 that resulted in the execution of twenty people. While other cities might try to downplay or hide some of the darker parts of their history, Salem has fully embraced its past, with a focus on the importance of protecting our civil liberties. All around the city you can find museums and memorials discussing the history of the trials and honoring those that unjustly lost their lives. It is especially interesting walking around the Old Burying Point Cemetery to see the graves of some of the people that played a major role in the trials. Beyond all of the witch-themed fun, Salem is just a great city. There is an underlying historical vibe and some really impressive old buildings that send you back hundreds of years in history.

Driving Time to Next Point: 5 hours 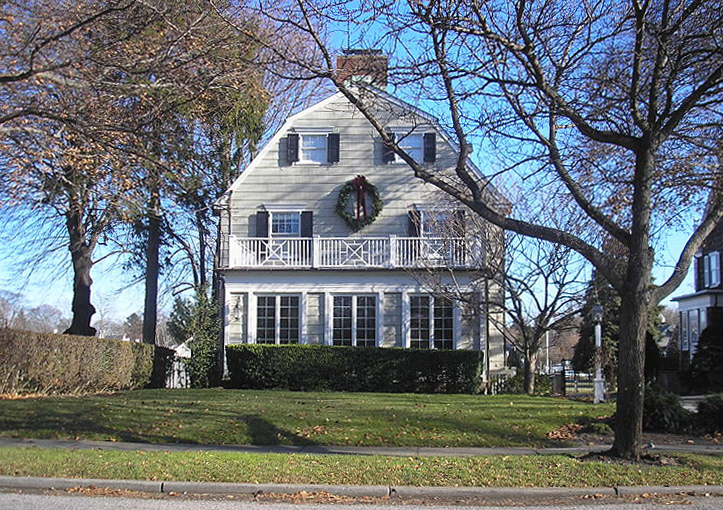 In 1974, Ronald DeFeo, Jr. killed six of his family members in the house that is now known as the Amityville House. The following year, the Lutz family purchased and moved into the house but were forced to leave less than a month later due to paranormal activity they claim to have experienced. These events were immortilized in the 1977 book, The Amityville Horror, which was later made into an iconic horror movie. The current house number was changed from 112 to 108 because the owners wanted to avoid some of the notoriety.

Note: This is a private residence, not a museum or tourist attraction. Be respectful!

Driving Time to Next Point: 1.5 hours

The Legend of Sleepy Hollow (1820) is one of the oldest, scary stories in American history. Washington Irving’s time in Sleepy Hollow and nearby Tarrytown inspired many of the locations and details that went into the story. Even some of the character names can be pulled from the gravestones in the Sleepy Hollow Cemetery. Popular media shows the Headless Horseman Bridge (where Ichabod Crane tries to escape the Headless Horseman) as a covered bridge, but the original bridge that inspired the story was not actually covered. A recreation of the original bridge can be found close to the cemetery.

It’s possible to recreate Ichabod’s famous route from the Van Tassel house all the way to the original Headless Horsemen Bridge by walking along Route 9. As an aside, the actual bridge that inspired the story is no longer standing, and the bridge that occupies its place is a normal, modern bridge that you might miss if you aren’t looking for it. Check this blog post out for a really well done and detailed view of Ichabod’s route with pictures and references to the story.

In my opinion, most of Route 9 is fairly generic. The real fun begins once you reach the cemetery. The Old Dutch Church, which was originally built in the late 17th century, stands at the entrance to the cemetery. Past the church is the sprawling Sleepy Hollow Cemetery where you can spend hours walking along the complex web of paths. I had to double check a few times to make sure I wasn’t hearing horse steps coming up behind me. The cemetery is also the final resting place for Washington Irving, along with many other famous historical figures including Andrew Carnegie and Walter Chrysler.

Driving Time to Next Point: 2 hours

Friday the 13th was released in 1980, introducing audiences to the deranged, hocky-mask-wearing killer, Jason Voorhees, for the first time. Jason has gone on to appear in twelve films, but everything started at Camp Crystal Lake, where he had his murderous way with a group of unsuspecting teenagers.

The Camp Crystal Lake portrayed in the movie is actually Camp No-Be-Bo-Sco, a real Boy Scout camp located in northern New Jersey. The camp has started running Friday the 13th tours as a fundraiser. Be warned, though, the tickets are expensive ($100), and the tours are very rare, so sign up for their mailing list updates if you are interested. You can learn more about the camp or purchase tickets for upcoming tours on their website.

If you aren’t able to land one of the elusive tickets to the camp tour, it is also possible to visit nearby Blairstown and eat at the Blairstown Diner which were also prominently featured in the film.

Note: Camp No-Be-Bo-Sco is a private Boy Scout camp. You must have a ticket to one of the guided tours to visit the camp.

Driving Time to Next Point: 4 hours

Burkittsville, Maryland rose to fame in 1999 when it was featured in the Blair Witch Project, one of the most successful independent films of all time. The main characters (really, the only characters) in the film visit Burkittsville to interview some of the townspeople before heading into the woods in search of the Blair Witch. Many of the wooded scenes were filmed in the nearby Seneca Creek State Park. While you are in the area, take a stop in Antietam Battlefield, the site of the bloodiest single day of battle (23,110 casualties) during the Civil War — a real-life horror story.

Note: Burkittsville is not a tourist destination. It is a real, functioning town. Be respectful! 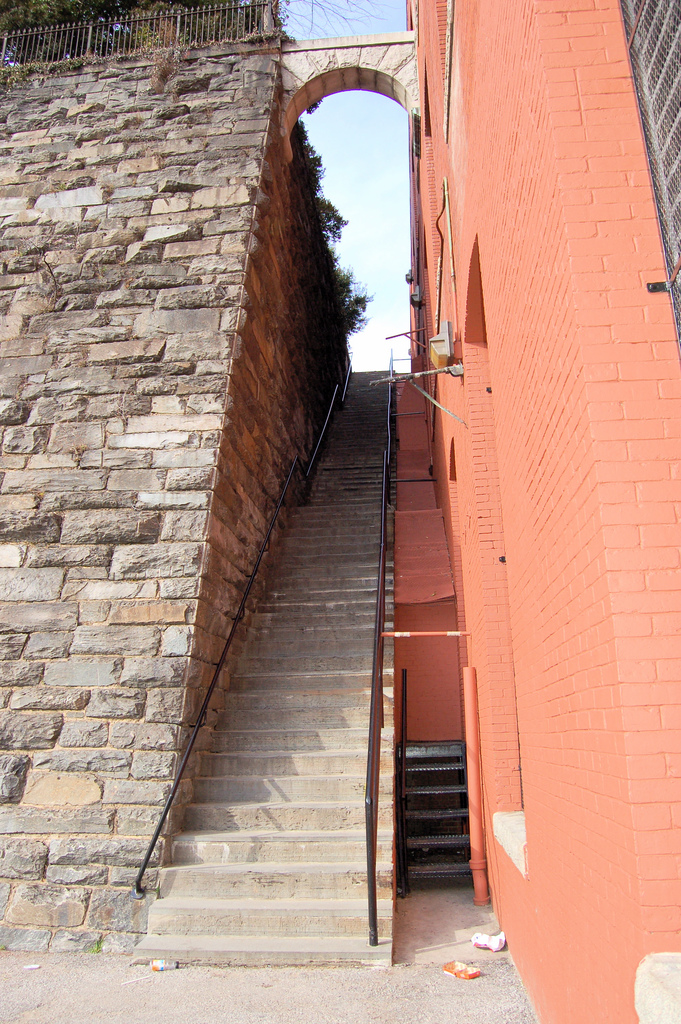 What better way to end the trip than throwing yourself down the Exorcist stairs? The Exorcist was released in 1973 to much critical and commercial success. The film was nominated for ten Academy Awards and ended up winning for Best Sound Mixing and Best Adapted Screenplay. In the film’s climax (Spoiler Alert!), a priest throws himself down the stairs after he is possessed by the devil. The iconic scene has given the stairs a cult status for horror movie fans everywhere.

The stairs are legitimately steep, so be careful as you walk up or down them. Also be aware that you may encounter runners or homeless people on them (I know from experience). The 1789 Restaurant (located at the top of the stairs, across the street) is a really nice (but fairly expensive) place to have a meal after you’ve satisfied your horror fix.

This is the final stop on the trip. Happy Halloween!

This one is a little out of the way, so I didn’t include it as part of the official trip, but it might be worth a stop if you have the time and don’t mind driving a little bit further. George A. Romero’s Night of the Living Dead was a groundbreaking film for the horror genre when it was released in 1968. Much of the zombie lore that we have come to expect in today’s films can be traced back to this movie. It was also one of the first films to push the envelope for onscreen gore. The iconic opening scene where the dead return to life (“They’re coming to get you, Barbara.”) was filmed in the cemetery. The farmhouse where the main characters spend most of the film was also located in Evans City, but it was demolished long ago.

Note: Evans City Cemetery is not a tourist destination. It is a real cemetery. Be respectful!