Lisbon, the capital of Portugal, is a beautiful and vibrant coastal city, complemented by its rich history and culture. I noticed a similar vibe in Lisbon as I had felt in some of the Spanish cities I visited on my trip, which is to say it is very relaxed. And to top it all off, Portugal is somehow even more inexpensive than Spain. 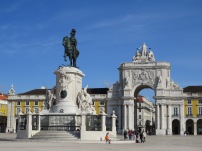 My visit to Lisbon started at 4:00 AM following an eight-hour overnight bus ride. I knew the bus was stopping at a transit center, so I figured there would be buses or taxis or some other means of transportation to get where I was going (where was I going that early?), but I was wrong. Dead wrong. The transportation center was completely empty, and it was cold — way colder than I felt it should have been in Portugal. I found the entrance to the metro, but it didn’t open until much later either. So I waited. Actually, almost everyone from the bus waited. We walked around the station aimlessly, examining the architecture and wondering why the cafés weren’t open to receive our business. I’m convinced that Lisbon’s transit center would be the perfect setting for a fight scene in a James Bond movie — complete with concrete catwalks, lots of funky shaped objects to use as cover from gunfire, and security guards patrolling the area following predictable routes. After walking the catwalks for a while, I eventually found a bench and dozed off. Around six o’clock, the station employees arrived and opened the waiting area. All of the stragglers descended on the waiting area and laid out on the benches, napping until around eight when the transportation officially started. Such a long wait, but it was worth it for Lisbon.

END_OF_DOCUMENT_TOKEN_TO_BE_REPLACED

Ceramic tiles, called Azulejos, are a key feature of Lisbon’s architecture. A walk down any street will reveal colorful and detailed tilework on buildings, both inside and out. This beautiful tile work isn’t just on important palaces and churches either; it can be found on many regular houses, shops and public buildings. Much of the tiling consists of bright colors and elaborate shapes, but some of the tiling also depicts stories and scenes from Portuguese history.