The Caminito Del Rey (Little Pathway of the King) is located in El Chorro, Spain, approximately one hour northwest of Málaga. The pathway was built from 1901 to 1905 as a means for workers to cross between two hydroelectric plants in the area. The path is elevated up to 330 ft above the canyon floor, and over time it has deteriorated to dangerous levels. Despite the path’s poor condition, adventure seekers continued to cross it, leading to multiple deaths over time. The danger of the path is well documented by the Expert Vagabond. He is a braver man than I am. Starting in 2011, the pathway was closed for renovations, and it finally reopened in 2015 with a safer wooden boardwalk and handrails. In the pictures below, you can see the new path built over the old, dilapidated path. 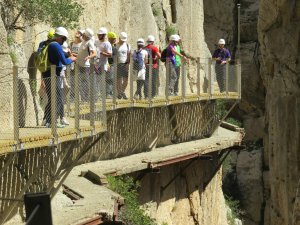