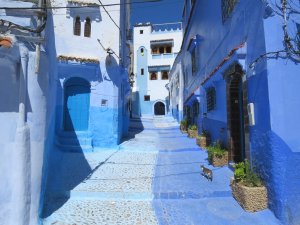 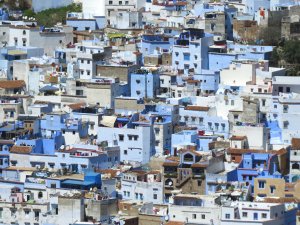 Chefchaouen was made for Instagram. Let’s count the ways. Old buildings and winding streets painted in varying shades of blue. Check. A picturesque mountain setting with lush green vegetation. Check. Cute elderly people walking the streets in their culturally appropriate yet non-oppressive clothing. Double check! Underneath Chefchaouen’s photogenic exterior you will find a quaint city with a laid-back vibe. It’s no surprise it was one of my favorite places I visited in Morocco.

In many ways, Chefchaouen feels like a representation of what the Western world wants Morocco to be — a unique destination that is culturally different than North America or Europe, but one that is also accessible, comfortable and subtlety progressive. There are signs of this everywhere in Chefchaouen. Cute, precocious children play and laugh with their schoolmates. Families hike to the top of hills to take in views of the city. Merchants quietly sit beside their goods instead of hounding you incessantly. And young women walk around with their long hair hanging down, stopping to take selfies in the main town square. Yes, actual selfies.

These things may seem fairly standard, but I witnessed very little of them in the other Moroccan cities (except in the newer parts of Casablanca and Marrakech). Sure, I saw school children playing in other places, and yes, there were old people walking down the streets, but things felt…different. There was a more stern, serious tone. I was just as likely to encounter kids demanding money (“Give me money”) or to see an old person almost get run down by a motorbike on a sidewalk. That’s not to say that everything was peaceful in Chefchaouen. One thing that I sa-

Oh, look! An elderly woman walking down the street! 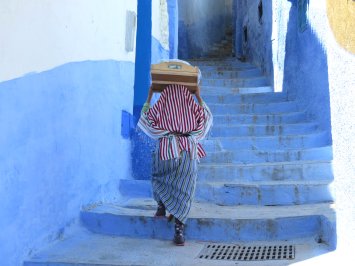 Not everything was peaceful in Chefchaouen. There were a few semi-aggressive vendors, and the boy that showed us the way to our riad falsely claimed I agreed to pay 50 Mdh for his services (he was mumbling a bunch of stuff in broken English and Arabic that I sort of just went along with, so maybe I did agree after all). Fortunately, the owner of my riad didn’t buy his story and told the boy to get lost. We had a few other less-than-relaxing encounters, mostly involving drug solicitation. Let me just say, if you want to score some questionable Moroccan hash from a sketchy dude in an alley, then Chefchaouen is the place to go. In fact, you won’t even have to go looking for it. They come to you! The drug I actually wanted, alcohol, had a similar black-market vibe (like it does in the rest of Morocco). One night we agreed to eat at a restaurant because the waiter told us they would serve us beer. When I asked about the beer, the waiter offered to take us into a back room. Not exactly what I had in mind. 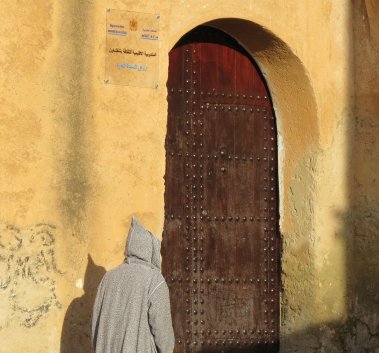 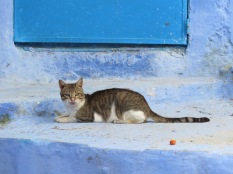 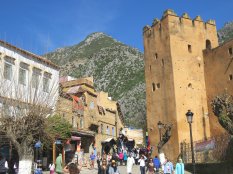 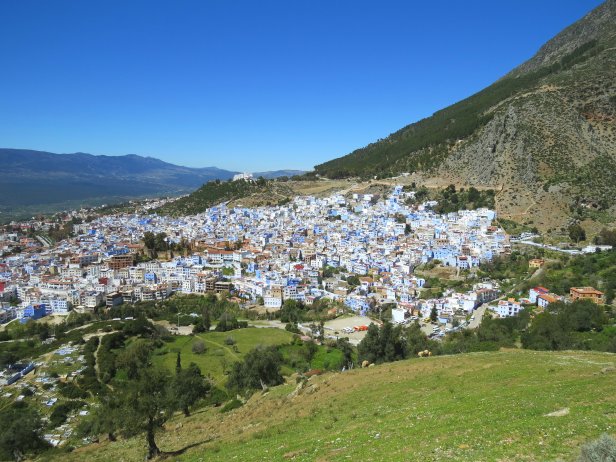 Perhaps the biggest drawback of Chefchaouen is its remote location (many people may consider that a positive). If you aren’t coming from Tangier then you can expect a long (4+ hour) bus ride. Another option is to hire a grand taxi in Fes or Meknes, but that will take almost as long and will be more expensive depending on how many people you can squeeze into the taxi. Either way, Chefchaouen is worth the effort, and the trip through the beautiful, rolling countryside makes the journey almost as much fun as the destination. Just don’t forget your camera.