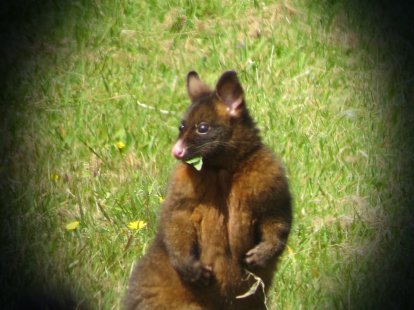 The Australian Possum is one of New Zealand’s biggest pests. It also happens to be adorable. For those of us from North America, you are probably used to something like this or this when thinking of a possum. Why are our possums so much mangier here in the Northern Hemisphere? The New Zealand possums are even cute when they run. They have this awkward, but endearing, gait and a furry tail that flaps in the air. Yes, their cuddling quotient is off the charts, but massive campaigns exist all around New Zealand to obliterate these little guys.

It’s not just the possums that are on this Kiwi hit list, either. Some of the other fierce predators are mice, rats, weasels, stoats and, of course, the ever-vicious wild (stray) cat. It is quite humorous seeing signs warning of these ‘deadly’ creatures. Although it appears silly on the surface, these animals do pose a great threat to many of New Zealand’s native birds that are endangered or at an elevated risk of endangerment.

All of these animals have been introduced by European settlers. In fact, the only native land mammals in New Zealand are bats. Since the early settlers didn’t also bring over bears, panthers or tigers, the small predators are able to proliferate unchecked. Human efforts to keep their numbers down seem to be working, but it is a constant struggle that won’t end any time soon.

One thing to note is that possum fur is commonly blended with Merino wool in many of the clothing items sold in New Zealand. This is a great use of wildlife resources. I was originally going to make a joke about using possum meat for possum burgers, but then I saw this article. Well played, New Zealand. One step away from Roadkill Cuisine.