As I was walking through the Ginza neighborhood, I came across Kabuki-za, the main Kabuki theater in Tokyo.  Kabuki is a traditional Japanese theater style with elaborate costumes and makeup.  The theater was offering single act tickets, so I bought one and was able to watch a short performance.  In the story I saw, a spider demon pretended to be a sword-smith’s daughter and tricked a master and his men.  Eventually the demon was revealed and they had an epic battle.  The costumes were very elaborate, and the acting was over the top and exaggerated.  I wasn’t able to take pictures during the performance, but you can see what the theater looks like on the inside (I was in the nosebleed section).  There were lots of older Japanese women there dressed in kimonos, which added to the experience. 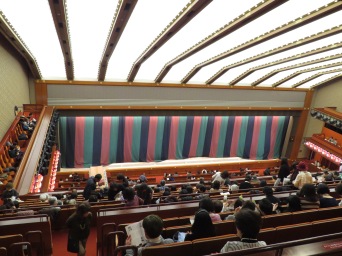